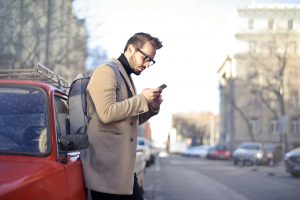 By Doug Stern and Lori Mendelsohn

LM: Doug, we met on a dating app and became friends. Can you share some insight about what you see over and over which is a huge turn off on a profile?

DS:  Bad pictures are high on my turn-off list.  These includes photos of someone wearing sunglasses, or in a group, or obviously outdated, or just badly taken.  I also pause when I see so MANY pictures that my narcissist radar starts to beep.  To be glass-half-full for a minute, I will be more interested in a woman with pictures that show her clearly and honestly.  Personal bonus points for pictures that naturally convey a love of life.

I have more filters, but LOTS of women shoot themselves in the foot with their pictures.  Great question, Lori.

LM:  “A picture is worth a thousand words”….I wish men took this far more seriously. They have 1-2 seconds to grab someone’s attention and then….lost forever. I mean, do they really think that a bathroom selfie with dirty towels hanging over the shower curtain is a turn on for women? Or….standing by a dead animal, or holding up THE CATCH OF THE DAY?

DS:  You’ve hit a nerve.  I want to be with a woman who has some skin in the game.  So, yes, I’m liable to dismiss a woman with a selfie taken with her unmade bed and piles in the background…even if she looks super attractive.  Or, a woman who only has one or two pictures on her profile — even if she’s hot and they’re good pics — but with NOTHING she has written about herself.

In situations such as these, I hear a little voice in my head saying to her, you’re going to have to make more of an effort.  This sense of disparity I have goes much deeper.  It goes to concerns I have about the importance of fairness and equality in relationships.  I don’t mind working hard at making a relationship work, PROVIDED the other person is also working.

LM:  Whoa! You are getting a sense of unfairness and inequality just by a shoddy profile?

DS:   Yes, don’t you?  You and I put a lot of thought and effort into building our profiles — the photos, the content, and the like.  When I see a woman’s shoddy or bare-bones page, I hear her sending me a message,  she’s saying, Doug, you don’t deserve my interest or effort.  If you want to call that unfairness or inequality, Lori, you’re right.

LM:  I agree with you that as in most things….”content is king”…and those who put effort into writing a decent profile/are attractive, SHOULD prevail. BUT I also toy with the idea that perhaps one can say too much. My profile on Match is extensive and I truly wonder how many men read the whole thing. (Because if they did, they wouldn’t be responding the way they do.)

DS:   Yes, there is also a danger with presenting too much info.  Too many pictures, too many words.  This may turn some of us off.  Moderation and balance are good intentions to have.

Even though the shoddy or bare-bones page is hard for me to say Yes to, that’s not to say I don’t believe in kismet.  I might be thunderstruck by a woman’s smile or the look in her eyes or the tilt of her head…regardless of anything else that’s there or not there on her profile.

AND, I realize that there are some place-holder pages in progress, where the woman is building her profile and just hasn’t gotten around to adding more pictures or to writing something about herself.  Plus, there are women with toe-in-the-water pages…on the app just to see what’s out there.  I assume they’re getting back what they’re there for.  But I’m probably going to pass on them.

LM:  I agree. If you can’t put the time into the profile, how will you be in a relationship?

My word of advice is-present yourself in the best possible context and hope for the same standard. Chemistry is key-and often times words-wit-humor can be the best chemistry.

Doug Stern is a marketing and communications strategist and can be reached at http://www.doug-stern.com

Lori Mendelsohn is a Certified Matchmaker and Dating coach and can be reached at www.smartfunnysingle.com